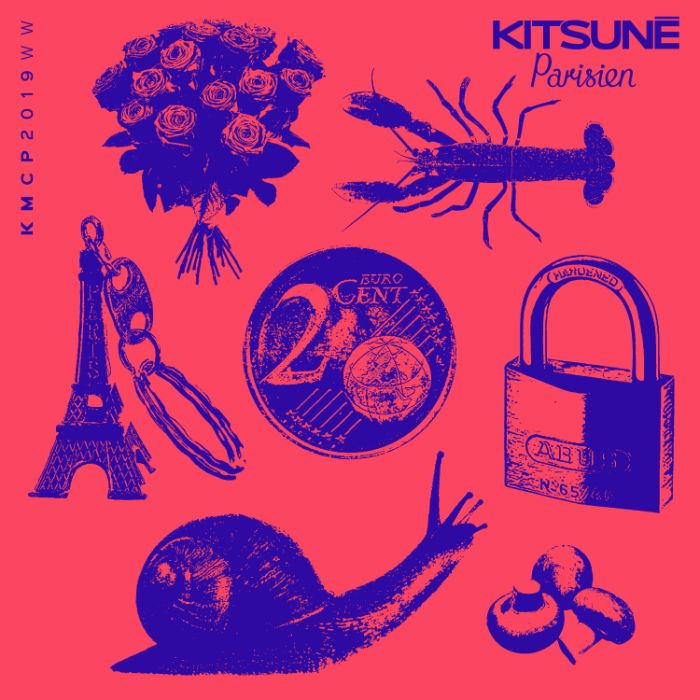 Kitsuné Musique, the trendsetting label from France, is back with it’s fifth Parisien Compilation. A collection of fourteen of the newest and best artists coming up in the French scene. It’s been two years since their fourth iteration, but the long-awaited number five is here. As in the past, they aren’t focused on genre, their only care is the potential of the artists they’re showcasing. And though we don’t speak a lick of French, the beauty talent from these artists transcends language.

MonteRosso is an electro-pop duo comprised of Mathilde and Thomas. ‘Aimants’ is beautiful. Probably the most beautiful in the entire bunch. It’s got a lot of depth to it, with how it makes us feel. The very first chord draws the listener in immediately. It’s so striking. And it leads into these “aaaaahs” that feel both melancholy and sensual. Then the lyrics begin and the tone is very playful. It all feels like exploring an unfamiliar town. We’re cautious because it’s all so new but we’re excited. We’re inquisitive. But we’re anything thing but scared. It feels like someone is there, holding our hand, leading us through it. ‘Aimants’ is one of those songs that feels like joy. An adventure.

Napkey appeared in the previous Parisien compilation. Another duo: Benjamin Cholet and Justine Rousseau. Their song ‘Great Escape’ is spectacular. This futuristic, sci-fi exploration is just fun. That’s the best description for it. It’s fun. Like the title claims, it is a great escape. Both from the universe and the confines of musical expectations. The synths and vocal effects work together perfectly. I started my journey to the moon. To see why our planet shines. This isn’t the only song out there with this sort of aesthetic, but there’s something about those two lines that feel refreshing. You don’t hear about that. The honest and innocent exploration to see what makes our planet beautiful.

EQUATEUR is the artist name of Charles Rocher. He is an author on top of being a composer and a producer. His song in the compilation, ‘Pelican’ has the most delightful guitar. In the beginning, it’s layered with this synth effect that makes it feel like we’re in a tropical jungle. It sounds like the chatter of animals up in the trees. And though that’s fascinating, it’s really the guitar that sticks with you. It’s there throughout the song, anchoring us. Underneath all of the synths and the vocals, this one little guitar will peek through. The song feels very somber. The lyrics are delivered very genuinely, but that feeling with such an upbeat track behind it is a very stark contrast.

Artist Kemmler began his career when he was 14 when he attended a writing workshop. His music is very raw and honest. Full of emotions and honesty. His song ‘Dernier Verre’ is no different. Like others on this list, the opening is so captivating. It starts quietly. Barely even there. Then it grows into a cautious piano. When the vocals begin, they’re delivered with so much emotion. Right from the bat, we know that this song is heavy. As it continues on, it just gets more and more. We’re drowning in his emotions. And then there’s the sound of a drink being opened and poured. Everything changes there. The synths feel a bit warped. Our beautiful piano is changed. And our singer has changed too. He sounds defeated. A lot has happened in such a short period of time. The vocals are probably the most powerful part of this song. They’re delivered so honestly. He sounds like he’s fighting actual tears, which is extraordinary, especially for music these days. That raw emotion just isn’t seen much anymore.

The entire selection of Kitsuné Parisien V is a journey. An adventure. Whether it be through an unfamiliar town. Through space. A jungle. Or even our own emotions. We’re taking somewhere with each of these songs. Kitsuné Musique is also using this release as an opportunity to rebrand. They’re going back to their native French roots, and they’re modernizing their logo and their entire mission. It’s safe to say that with this compilation they’re completely successful. And this is just the beginning.

Be sure to check out the full compilation below.

0 comments on “Kitsuné Musique Returns with Their Fifth Parisien Compilation”