We all have a little bit of Sad Girl inside of us. That’s what singer/songwriter Sasha Sloan is here to remind us all. She is currently on tour with fellow sad girl Lauren Aquilina. On March 17, they stopped by The Crocodile Cafe in Seattle to entertain us, serenade us and just…make us feel good about feeling bad. The show was sold out and packed to the brim, which is nice to see on a Sunday night.

Lauren opened the show, and it seemed like the crowd was there just as much as they were for Sasha, which is also nice to see. It’s hard being the opener. But she got the crowd moving and laughing. Both ladies had this really endearing and humorous way of talking about their really awful love lives. It was charming and connected us to the songs on a personal level.

During the set, Lauren spoke candidly about how she quit the music industry for a while, it didn’t feel like her world anymore. But after writing a few songs for other people, she realized that she missed performing. She even premiered a new song for all of us called ‘Tobacco In My Sheets’ which is the most personal song she’s ever written. She was incredibly nervous to play it for us all, but it’s beautiful. Her energy with the crowd made us feel like we were friends.

When Sasha came out, it was another instant connection. These two amazing performers work so well together. They both have the same personal connection with the crowd. The instant feeling that we’re friends, or maybe that we’re all just going through the same thing. We’re all Sad Girls.

The crowd sang every word of every song just as loud as Sasha did. And she also prefaced most of her songs with tales of her horrible love life. But one point, she apologized, and took out her phone. She had to facetime her boyfriend, because they wrote this song together, and it’s the only happy love song that she has. So she facetimed him and told him that she was about to play their song. It was a moment of realness, and it was just adorable. 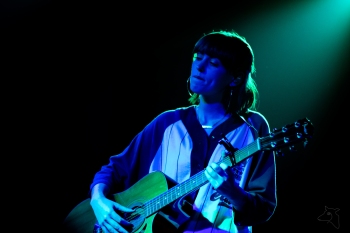 The set ended with Sasha also playing a new song. A very heavy and extremely personal song. One that, when she was finished, just caught us all up in thoughtful silence. It felt like no one even dared to breathe for a few seconds, before erupting into a thunderous applause. Very few artists can have that sort of impact. It felt surreal, a moment that lasted forever, even though it was only a second long.

It was an unforgettable show from both of them. There are still a few days left in the US tour, definitely go and see these two if you can. You’ll be left feeling things.

0 comments on “Sasha Sloan and Lauren Aquilina @ The Crocodile”